I’ve been getting quite a few questions about my use of the NIBE Uplink API for monitoring my NIBE heat pump installation so this Page is a simple HOWTO guide for using a Perl script running on Linux to grab data via the NIBE Uplink API.

This procedure works for me and I’m publishing it here as a Proof of Concept in case it helps other people trying to accomplish the same objective. It may not work for you. It may not get updated in line with changes to the NIBE Uplink API service. You are responsible for complying with the terms of the NIBE Uplink API Services Agreement and for keeping the application Identifier, Secret and any generated user Tokens confidential.

As with all other material on this Blog this article is published under the terms of the Creative Commons Attribution-ShareAlike 4.0 International License

I have an 8kW NIBE F1145 Ground Source Heat Pump which is configured to send data to the NIBE Uplink service over the Internet. The uploaded data is accessible via the NIBE Uplink website and via the NIBE Uplink smartphone apps, but those apps use the API under the covers and it’s possible to call the API directly from a custom program or script to access all the same data – and then do more interesting things with it.

I have written a script which is called on a timed schedule (every 5 minutes) to download the parameters I’m interested in which I then re-publish using MQTT (my personal preference; in no sense essential) to integrate them with temperature data from other sources (Dallas Semiconductor One-Wire sensors and Oregon Scientific temperature / humidity sensors – see other pages on this Blog for more details of those if you’re interested). Everything then gets loaded into an InfluxDB time-series database from which it can be extracted and graphed with Grafana (again my personal preferences but they work well for me).

An example of the sort of dashboard generated by Grafana is shown below but to be honest a static screenshot doesn’t do it justice since hovering over any of the graphs displays the numeric data values and clicking on one or more of the labels in a legend shows just those lines (and auto-scales to suit). Scrolling left and right across different time periods and zooming in and out is also easy and slick. 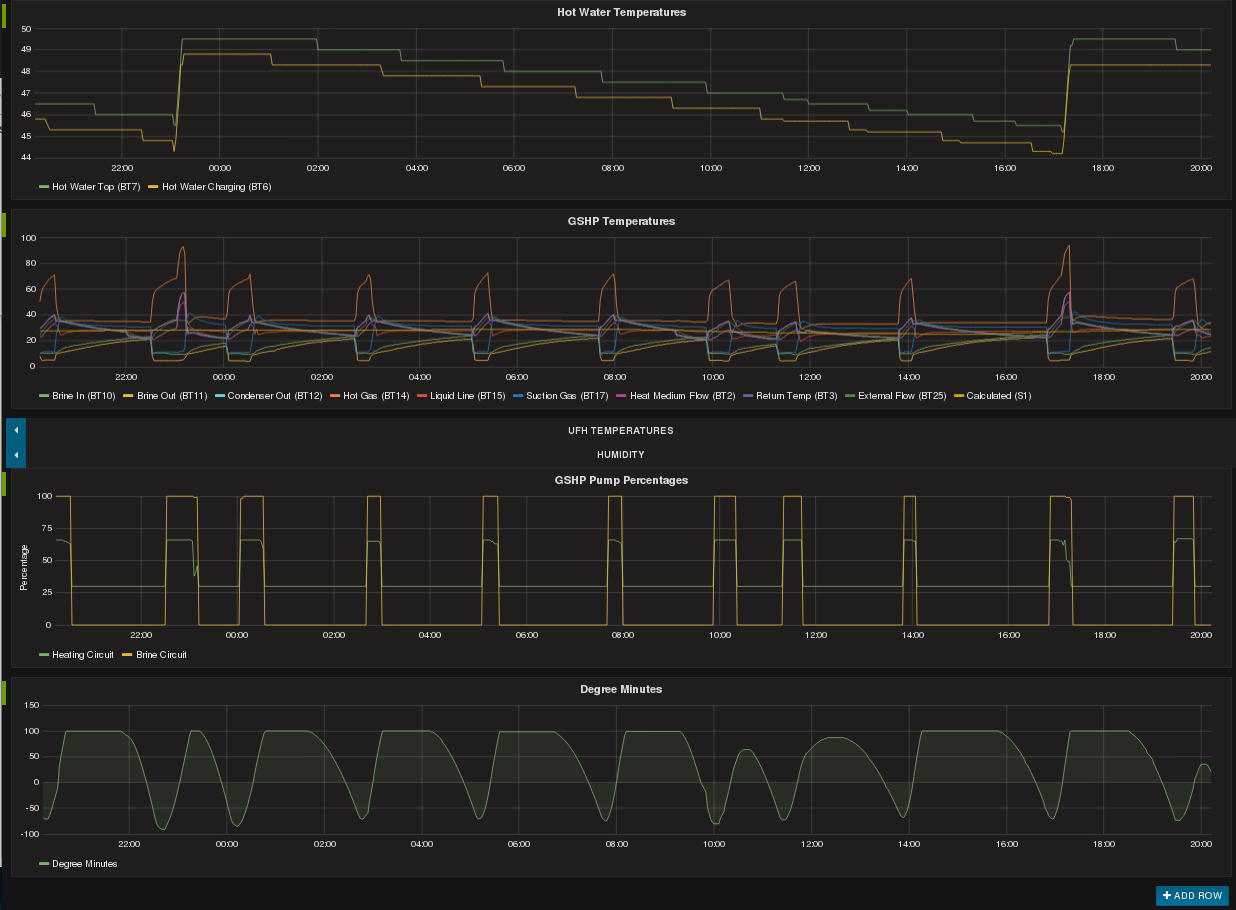 At a bare minimum you will need the following to use this procedure:

The official documentation for the NIBE Uplink API is at https://api.nibeuplink.com/docs/v1 (note you need to login to access that page). The detail is described on those pages but in summary:

Personally I found the biggest barrier to getting the API working was understanding what the OAuth2 Callback URL was all about and what would be an acceptable value to use for that (there are several constraints). Actually it’s not all that complicated and it only needs to be used once, in order to initially get an Access Token. Importantly, it’s possible to run some steps in the procedure on different machines (as long as they’re done in quick succession). Here’s a summary of how it works:

I believe it’s necessary for the Callback URL to use HTTPS and since that can be problematic to configure I’m hosting a simple script on the same server as this Blog which anyone should be able to specify as their Callback URL – it will simply print out the generated Authorization Code (or any error message). That URL is: https://www.marshflattsfarm.org.uk/nibeuplink/oauth2callback/index.php

(I’m going to assume the nice people at NIBE Uplink will permit multiple applications to be registered which have the same Callback URL.)

If you want to host your own installation of the Callback URL the PHP script code I’m using is as follows:

The Perl module LWP::Authen::OAuth2 is used to hide a lot of the complexity of OAuth2. There’s a good documentation page for that at http://search.cpan.org/dist/LWP-Authen-OAuth2/lib/LWP/Authen/OAuth2/Overview.pod though in principle if you exactly follow the procedure outlined below you don’t need to understand how it works.

The computer which will run the script that calls the NIBE Uplink API needs some preparation to ensure the necessary supporting Perl modules are available. The following assumes it is running Ubuntu Server (or Desktop) 16.10, for the reasons described above.

Start by Registering the new Application you will be creating at the NIBE Uplink website so that you get allocated your various unique ID strings which will be required later.

Step 2 – Get an Authorization Code

Next, use your Identifier at the NIBE Uplink Authorize Endpoint to get an Authorization Code which relates to your usage (as an end-user) of your application (as a developer).

Step 3 – Convert the Authorization Code to an Access Token

Switching now to the Linux computer which will be running your script, you need to create a Perl script which will use the Authorization Code in conjunction with other details (in particular the Identifier and Secret allocated previously) to request an Access Token which can then actually be used when calling the NIBE Uplink API.

Now we have an Access Token we can actually call the API, and now things are less time-critical because the Token will be automatically renewed as required.

Some people have asked for examples of the JSON strings that are returned in response to the NIBE Uplink API calls. I’ve replaced strings like the serial number of my heat pump and my postal address details with XXXXXX’s but otherwise the responses are exactly as returned.

If this procedure works for you, great! Please leave a Comment to let me know. If it doesn’t work or doesn’t makes sense please also leave a Comment and I’ll try to help.

Clearly just printing out the systemIds isn’t very interesting but the NIBE Uplink API Documentation describes the other API calls in some detail.

A slightly sanitized version of the script I actually use can be downloaded from here. Note it has dependencies on further Perl modules and won’t work without other pre-requisites being satisfied. However, it does provide examples of calling some of the other NIBE Uplink APIs and how to extract the details from the slightly convoluted nested data structures.

I found the following resources useful for understanding how to get OAuth2 working: