I always knew there was a history of mining and quarrying in the area: there’s what used to be the brickworks – now a nature reserve – at the top of the hill and there used to be an alabaster quarry on High Street. What I didn’t realise was just how close one of the mines used to be – adjacent to where the track to Marsh Flatts Farm joins Chellaston Lane.

While researching the geology of the area to understand the likely ground conditions a few metres down and to check whether there were any local sandstone deposits that might have been the source of the building stone on the site I came across a report from the British Geological Survey on the gypsum deposits in the Chellaston and Aston-on-Trent districts. The full report is available from the Natural Environment Research Council website and I’ve included one of the maps below which shows the location of the “Crevy” workings for Aston No. 1 Mine. Marsh Flatts is on the far right of the map, about a third of the way down. 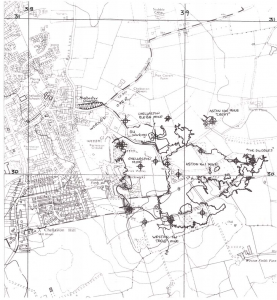 The report says that Aston No. 1 mine was mostly worked out by 1870 and was formally abandoned (requiring that an “abandonment plan” be lodged in accordance with the 1872 Mines Act) in 1937.

The Gypsum Mines of Chellaston by Marsh Flatts Farm Self Build Diary is licensed under a Creative Commons Attribution-ShareAlike 4.0 International License.