The PAUL NOVUS MVHR units come with the option of a simple LED control panel or a rather more advanced TFT touch-screen control panel. There’s more information about both panels on the Paul Heat Recovery Scotland website.

The TFT Touch-Screen is more capable and is generally recommended. However, one challenge is that it’s only intended for mounting into a recessed, European-style back-box – which doesn’t work in my situation, mostly since I don’t want to gouge a hole into a SIPS panel.The other complication is that the MVHR unit has a nice RJ45 socket which takes one end of the supplied CAT5E F/UTP lead (4 x Unshielded Twisted Pairs with an overall Foil screen) whereas the control panel has to be hard-wired via a loose adaptor board with a terminal block and two RJ45 sockets (one for the other end of the F/UTP lead and a second in case there’s a need to daisy-chain another control panel). The adaptor board is supplied with a transparent plastic case that looks like disposable packaging. 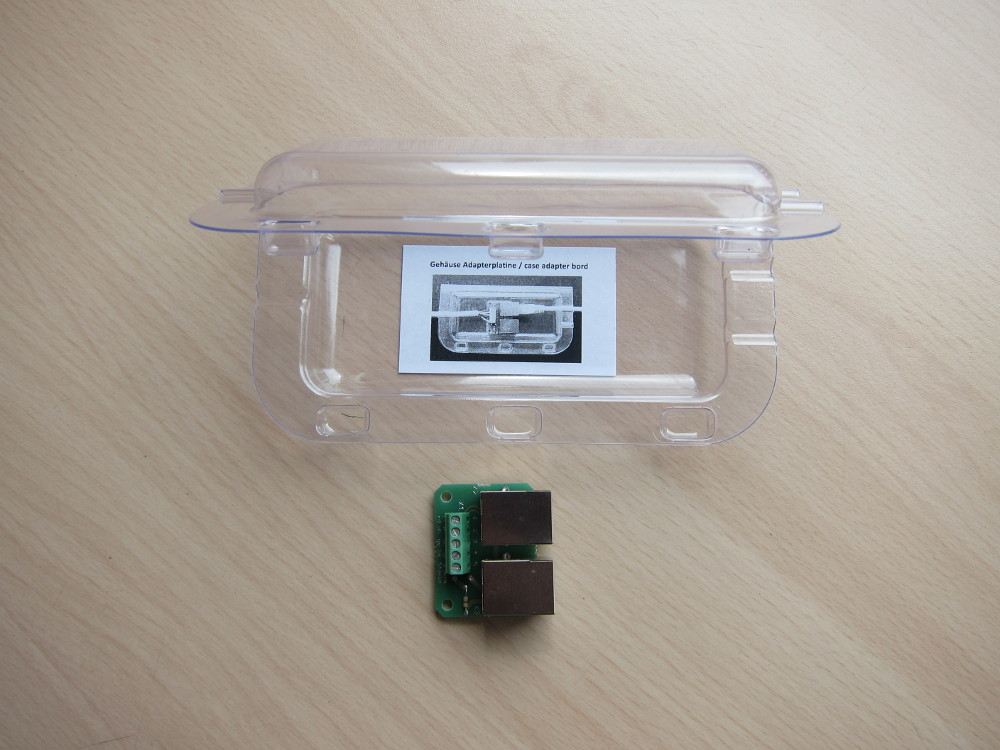 Adaptor board and supplied mounting box

I can make something better than that and it should be possible to locate the adaptor board in the same surface-mount box as the control panel, though that might then mean using a longer F-UTP lead depending on where the panel is located. In my case the control panel will be in the Plant Room near to the MVHR unit since I’m going to run it in “Automatic” mode with a 0-10V signal controlling the ventilation rate, with the 0-10V signal being adjusted from the KNX home automation system (via DALI since I happened to find a cheap Osram DALI to 0-10V converter on eBay).

I ideally wanted a box that was roughly the same aspect ratio as the TFT screen (which is 102mm x 78mm over the outside of the stainless steel frame) and I found one that was 115mm x 90mm and 55mm deep. Cutting a hole in the box lid to take the mounting plate was easy enough (the panel clips onto the mounting plate). Cutting holes in the side of the box to take the adaptor board was a lot more fiddly but worked out very well. 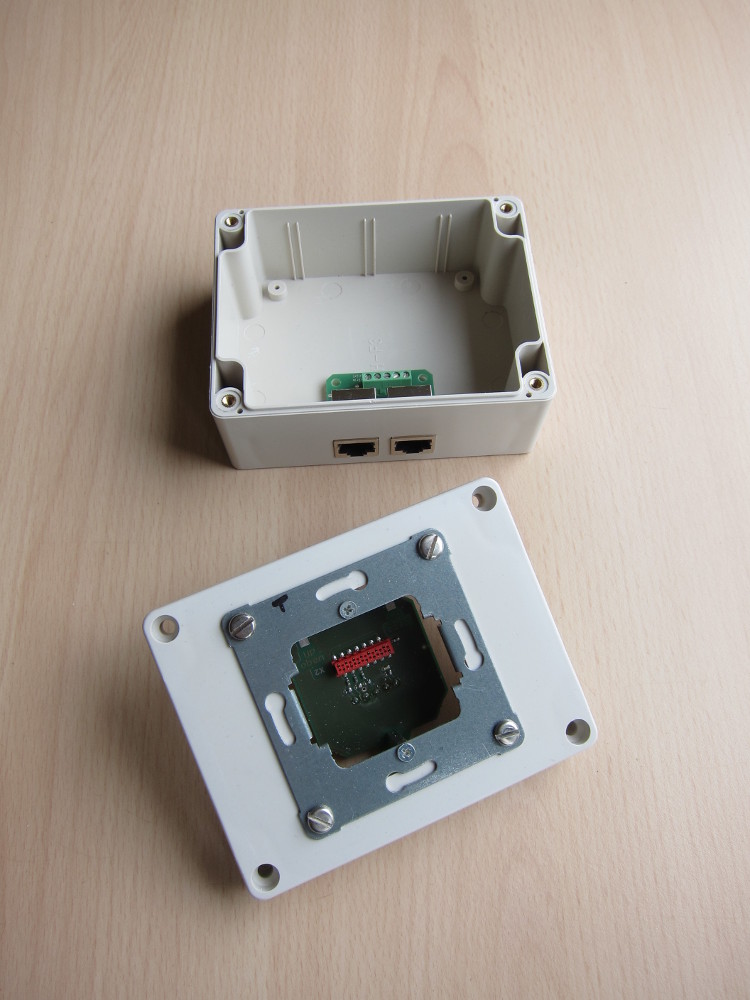 The above photo shows the adaptor board mounted in the base of the box. I decided to hot-glue it into the box – just a couple of blobs under the mounting holes. 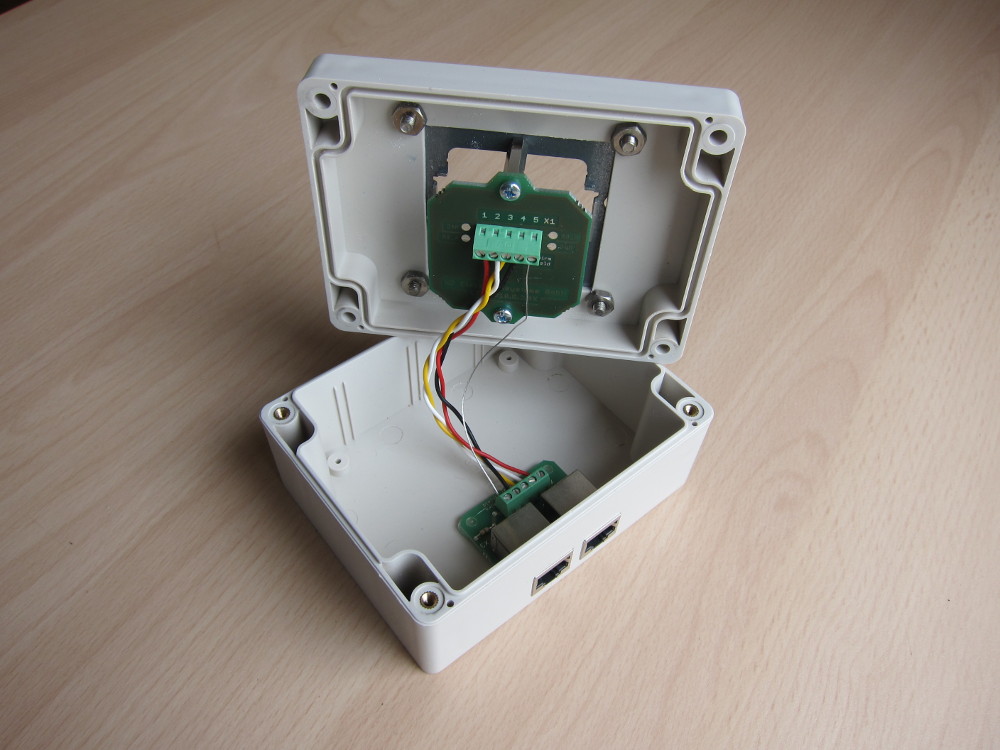 I had some spare KNX cable which has the right colour codes to match the markings on the terminals so I used that to wire the adaptor board to the display screen PCB. Based on some of the circuit diagrams I think the data signals are actually split across the two twisted pairs but that shouldn’t matter too much over such a short distance. 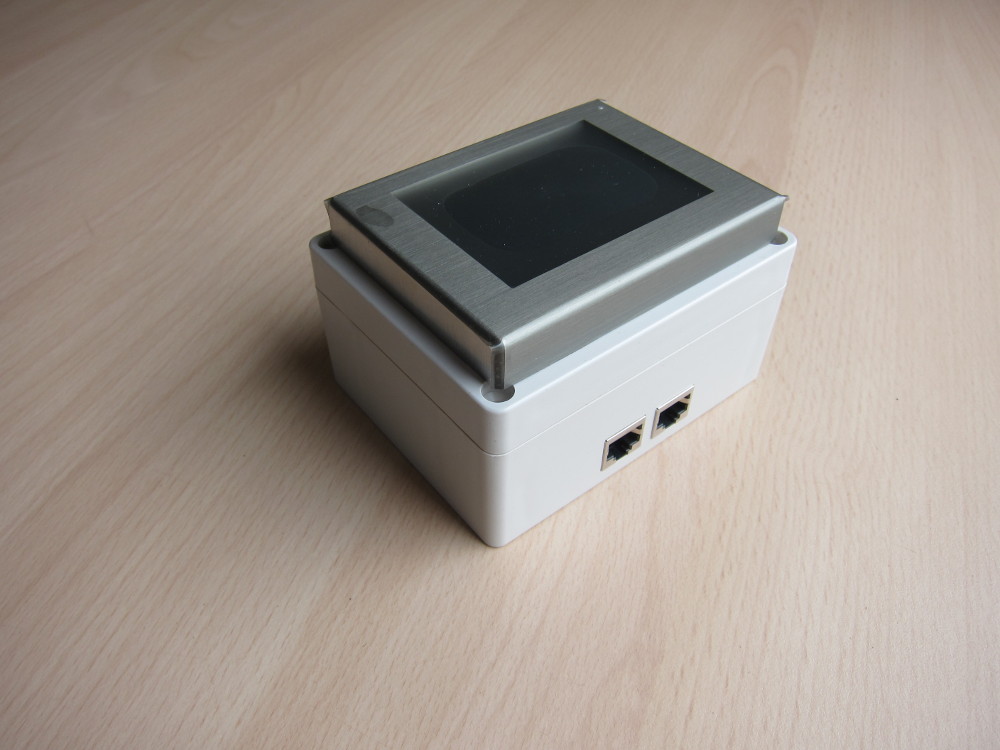 The completed assembly looks good. The corners of the panel overlap the box lid mounting holes, but that’s OK because the panel is simply clipped to its mounting plate and can be fitted after the lid is attached. The brushed stainless steel frame still has its protective film in place, complete with air bubble.

On reflection, a slightly larger (and shallower) box might have looked a little bit better since I hadn’t factored in the placement of the lid fixing screws when ordering the box, but it’s good enough for the Plant Room.