It’s always been the plan to install an L-shaped light over the desks in the north-west corner of the office on the second floor, hence the other lights are elsewhere in the room – four down lights along the south side and a couple of wall lights on the east wall – which leaves the north-west corner rather dark.

For various reasons it’s taken a long time to select the lamp and get it installed. Given the sloping roof a suspended system always seemed a good option but finding a suitable fitting took a while. In the end I settled on the Beta system from Apollo Lighting in Leeds. A few different configurations are available but to suit the space available I used four illuminated units coupled with a non-lit blanking section and a corner piece. Once nice feature is that each of the lit sections has its own DALI-controlled dimmer which can be controlled independently or as a group, so the unit just needs mains (live, neutral and earth) and the two-wire DALI bus, all supplied via a single 5-core flex, which makes for a very neat installation.

The electricians had taken care to prepare for the wiring (before selecting the fitting) by leaving space to pull in a cable, terminating in the store room on the north side where there are some other DALI dimmers. It was a little tricky to locate the exact position for the cable run but some careful measuring paid dividends and hit the right spot with the first hole. 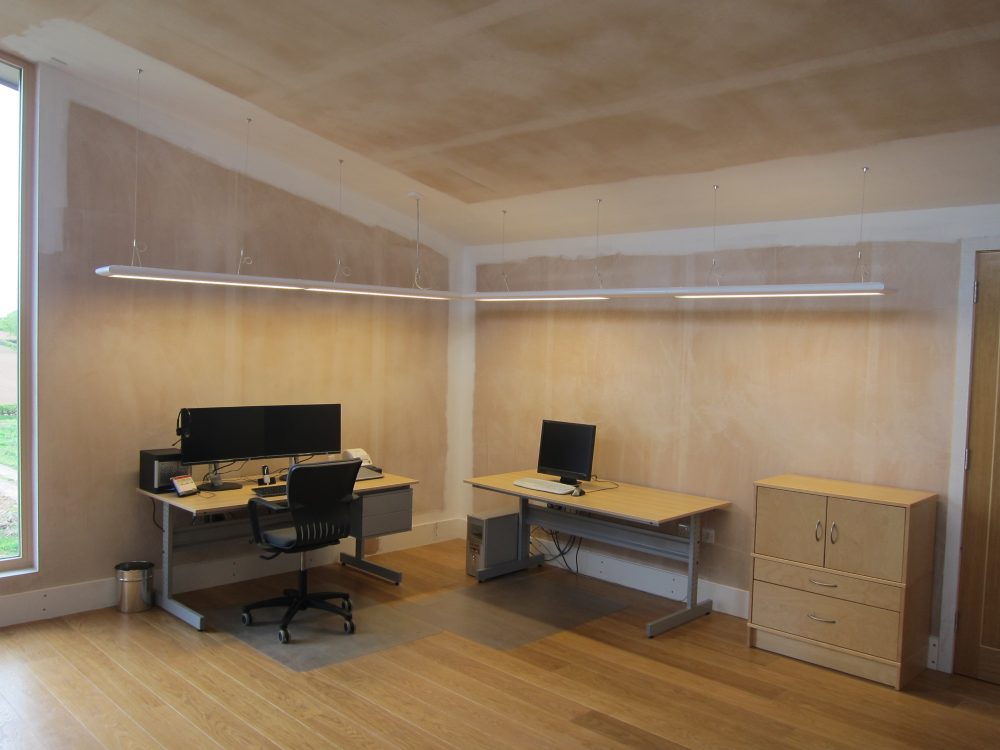 It can be difficult to judge the scale from the photo but it’s a big room and those desk tops are each 1.6m x 0.8m and the light is 2.8m x 3.3m (shorter on the left; longer on the right). I chose to locate it 2m above the floor, which seemed about right. The instructions were very specific about a 100-hour “burning in” period for the LEDs (for best performance when dimmed below 10%) so in the photo they’re on at full brightness and it’s possible to see the illumination on the walls plus some less pronounced uplighting on the ceiling that will work a lot better when the rest of the walls are painted.