There are a total of 120 Ethernet network outlets distributed around the house which terminate in 5 x 24-port patch panels on the second floor. Some of these are used for specific fixed items like CCTV cameras (x5) and wireless access points (x6) whereas others are available in case there is a need to connect a portable device in a particular location. It’s highly unlikely that all of the outlets will be in use at any one time so there’s no need to have 120 switch ports available. Initially I started with a single 48-port switch which has been adequate up to now but the plan was always to have a second 48-port switch which I’ve just installed.

The primary driver for the second switch is to double the port capacity but a secondary factor is that switches can fail and having two provides a degree of redundancy. Many of the devices rely on Power over Ethernet (PoE) which means that both switches must support PoE, which is unfortunate because PoE-capable switches are roughly double the price of non-PoE switches.

Adding the second switch made it possible to greatly simplify the wiring to the patch panels, which now looks a lot tidier. 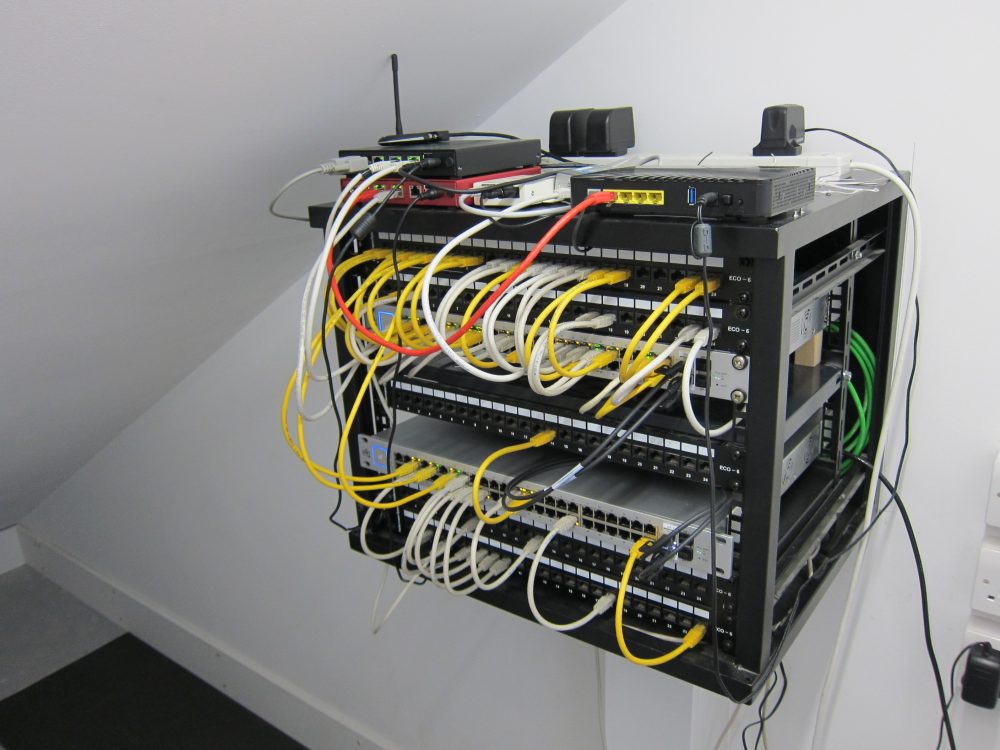 The Ethernet switches (painted silver) are 48-Port UniFi models from Ubiquiti Networks, each capable of supplying 500W of PoE. These are linked together using 2 x 10 Gb/s UniFi DAC cables in their SFP+ ports (the black cables connecting to the right of each switch) so they pretty much act as one 96-port switch. However, strictly speaking they are not stackable switches which means they must be configured separately (no big deal) and also means they don’t support the more advanced types of link aggregation across the two switches.

The plan is now to re-configure the main Router/Firewall (the red box at the top) to be wired to both switches in an Active-Backup configuration, so its connections will flip over to the second switch in the event of a problem with the first switch or with one of the ports or the cable. So far I haven’t decided whether to do the same with the HP MicroServer or to leave that with 2 x 1 Gb/s connections into just one switch (using LACP which uses both cables to provide high availability and also double the bandwidth).